After Transmigrating as a Demon, I’ve Been Adopted by Angels! 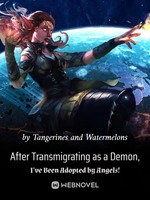 You’re Reading “After Transmigrating as a Demon, I’ve Been Adopted by Angels!” novel at WuxiaWorld.Site

Seems like an interesting read, albeit cliche. Only 20 chapters so I’ll see how it goes.

Whats with the novel these days? There are many new novels popping out but the quality…….. MEH

The legacy of the check-in novel continues

I wonder if author this day is okay in the head. They keep making story where MC want the whole world or universe surrender to MC feet.

I get a little annoyed reading the same synopsis again and again.

Without the sign in system this novel could have been a lot better, the title itself gives it an interesting feeling but the sign in system just makes the way he gets stronger much more boring.
Don’t get me wrong still a decent read but I came in hoping it was gonna be a unique read but it is like reading the same novel with different mc names

The dialogue is cringe sometimes

you know the novel going to be bad when he get s rank power twice a day from the start with sssssss rank bloodline like just make him god and get over it.
while i find joy in reading the few sign in novel only in those the mc need to put work in like when the mc so strong from the start is going to be so bad

Meanwhile, this novel the mc already has that power from the start and gets improvement via the sign in system.

And this novel is fast paced, so i don’t recommend for people who want to read where their characters grow emotionally and so on.

So based on this, my rating would be similar to wuxiaworld.site rating of 4/5.

Is it good? Yes, even better than some sign-in novels in here. Is there romance? Aint one so far, soo this one’s a plus one for me. Action? If you like, wow this mans so powerful, who is he and the random moments that usually appear in novels, you know what i mean e.g so strong, so weak.
Let me clarify this, this happens for the side characters, the mc is honestly bland pretty much like that guy in the sign-in mage before he become a degenerate who craves sex.

Anyways, it’s a good read but fast paced. Like come on even the power spectrum is weird. What the heck is lord angel rank? Demon king rank? It’s like the mc ranking system is different than the whole world’s system.

Is their any tier level list here? Its always confuse me

In the beginning, this one was good to read but the mc became reckless, stupid, his personality is a no for me and he became some horny-ass-sh*thead and there are many chapters I skipped full of not-for-children scenes before I decided to drop it﻿﻿

My Husband Was the Master of the Magic Tower

The Baby Isn’t Yours