Exiled Hero’s Leisure Life (Slow Life) – I Also Got My Very Own Dearest Angel After Getting Free! 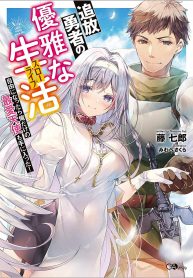 Alek, 39 years old, suddenly dismissed from being a hero.
However, an encounter with a s*ave woman brings him about the happiest post-retirement life!
“Oh Hero Alek, thank you for all the hard work you have done. Go resign from being a hero and have a rest.”
Alek was at a loss when he was suddenly dismissed from being a hero after 30 years of service in the kingdom.
As he thought of a plan, wondering what to do, “That’s right! Let’s get a s*ave with common sense that I don’t have!” was what came up in his mind.
And then the one he encountered was a modest yet beautiful nun Lilicia.
Having gotten the kind-hearted Lilicia as well as learned love, Alek decides to live a happy life as an adventurer from now on for her sake.
Meanwhile, a new team of heroes has been organized in the kingdom that exiled Alek, but they have been unable to successfully carry out a simple subjugation and were bringing about confusions…
This is an adventure tale of a new life of an exiled, former hero who has become free and found love!

I Don’t Want To Go Against The Sky

I’ll Just Live As A Villain