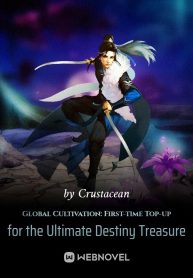 Global Cultivation: First-time Top-up for the Ultimate Destiny Treasure Average 4.2 / 5 out of 206

The Heavenly Voice was bestowed upon the world, and so the calendar of the Great Dao began. The world entered a new age of digitized cultivation. Humanity activated the immortal destiny seal to become cultivators. They toiled for their lives and powers — cultivation and breathing cycles, resources collection, divine powers and methods, spells, pill crafting, and weapon forging, they didn’t miss out on anything. However, when Su Yi activated his seal, he activated a Recharging System. Recharging by spending any amount of money and he would receive the First Recharge Gift Pack: Treasure of destiny — Starry Sea Bottle [Able to purify pills of any quality to become ultimate celestial-tier] “Cash in 111 yuan, receive Mental Cultivation Technique Rewards Pack: ‘Art of Longevity’” “Spend 500 yuan, receive Pill Crafting Gift Pack: ‘Time Pill Technique’” “Spend 1000 yuan, receive Spell Gift Pack: ‘Tiangang Swords Finger’” “Accumulate enough cash to become VIP1, activated function: Dao Treasures Fishing”…… After many years in the calendar of the Great Dao, Su Yi stood atop the clouds as the ancestor of the Great Dao. With one casual strike of his fist, the sky collapsed, the earth shattered and the origin of powers was crushed. Across all of the worlds, no god dared to provoke him!

My standard is now too low so I enjoy this novel lol.

Isn’t that just like every human and nation ever? When you’re rich you trample the poor, no? Though right now this “trample” is sugar coated with the word “sanction”. US and Europian countries periodically impose economical sanctions to countries that don’t conform to their measures.

idk if the inferiority complex about the history is a good example since most novel got to have bad start with good “system” or “ability” to make it interesting and fun when they face slap others later. There a lot of novel with those trend and it not just Chinese who did and there are some decent one out there.

Typical superchinaman plot armor OP face slapping novel. The MC doesn’t even get a family or any type of background. He’s the definition of a cardboard cutout. Reading this is like watching someone play a game you find boring.

If applying +5% ten times is equal to applying +50% once then this is a novel for you.

N.B. I stopped after chapter 48; can’t comment on how it becomes

World: Something happened, and when people become adults they go through a ritual that MIGHT give them an “Immortal Seal” which allows them to begin cultivation, includes inventory space, and if they die they are revived and sent back to Earth without their cultivation [so if they’re really old they’ll quickly die again due to being old (… yeah, there’s a logic hole, I know)].

If they don’t get a seal, they can’t cultivate and don’t have a second life; if they do get the seal they can have anything from ‘none’ (minimal) spirit root through a ‘top grade’ spirit root, or even be super special.

MC: has ‘none’ root but is a transmigrator (this is mentioned literally 1 sentence once in the novel) and his gold finger triggered when he got his root.

The MC, whose goldfinger is that he basically gets all the P2W options of a mobile game using Chinese Yuan, which is basically worthless in the world of cultivation so it’s easy to amass.

And then he doesn’t even take advantage of the (really cheap) daily/weekly/monthly bags after buying them once and just becomes a generic, arrogant OP cultivation main character.

It has the standard tropes of both cultivation and game novels, but they’re poorly executed.

A very telling moment: The first stupid antagonists attack him and he ‘kills’ one; their leader shouts angrily – “We need to get revenge for the big guy!”

Their leader literally doesn’t even say his name when calling for revenge.

There is a story. It is readable. It’s not terrible.

Does anyone know the raw name of this novel?

There is a lot of missing inform in this, the author add them on in later chapters so if u don’t read till then, it might confuse u.
-yeah…I gave up on this novel…Ch13…Don’t really like novel where it have a lot of add on in later chapters. it feel weird reading it, the spoil below will help u read like most of the thing in 13 chapters


Spoiler
First of all for starter – Everyone’s spiritual root effects were the most important secret and could not be revealed to the outside world… umm yeah, it been announce in front of all the students and teachers when it active so good luck hiding I guess?
-so his cultivation increased by +6, other people will get +1 – +2 per cultivation cycle, but he will get 72??? how the math work? how many cycle in one breathing exercise?
-Immortal destiny seal? is that the inventory? no explain? okay, immortal destiny seal seem to be working as an inventory and “chat” channel. The inventory seem very over power, the author did mention that MC require something to upgrade it but it seem very over power even when he didn’t upgrade since he can put 300+ wolf materials in it.
-he bought the pill I guess? no inform, I mean he did ask them to give him a mortal pill but is the only mortal pill they have “the cultivation pill”? no other pills type?
-Rich MC? He did recharge for the newbie gift pack and bought some pills but no inform on how much the mc spent. okay, it was explain in later chapter how much he spent on the stuffs.
-The secret region revive people when they die? There was a mention about the first group of people he killed, become mortal?
-Are ability/spell have like no cost to cast them? MC going on a killing streak and there no mention what so ever about him being low on spirit qi or anything relate?
-other novel MC scared of selling a lot of good pills but this one just give all the pills he refined in half a day to a girl he just meet twice?

Childish novel, recommended audience for this novel should be younger than 14.

it’s too bad. No character depth. Except for the lead, what’s left behind is garbage. It’s a very shallow novel.

man i though it could get worse after 20 chaps but it managed to get worse..

This have good potential but the author execute it so badly

I dropped it at chapter 44

– MC didn’t have any back story, he is just there and author be like “i don’t care he is the MC”
– There is no feels in all characters, like they are just npc
– The world building just sucks, I read it n just feels loss like we don’t even know where’s the mc home where the high school etc, it just state the name and nothing more
– the pace of this Novel is all over the place, and some of the chapters filled with filler
– the villain is the usual big family with Arrogant n dumbass characters
– and many more that i just to lazy to write

Or the African American (ur racist me too friend)

Holy fucking shit, this author is probably someone who has cerebral palsy or some shit. Nothing less than what you would expect from a chink author, i swear chinese people’s IQ are dropping with every passing year. Like you would not expect this even from the most retarded of people, but nah they take the cake. 0/5 dont read unless ur brain damaged

Strange! My Magics are Cultivating on Their Own