Master’s a Byoukidere and Needs Pampering! 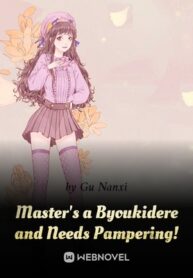 Master’s a Byoukidere and Needs Pampering! Average 4.7 / 5 out of 3

Father always said, “Xufang, why won’t you just die.” This was because of an abnormality found in her sixth chromosome, disrupting normal human functioning like the ability to speak or even basic senses such as feelings of hunger or pain.
Professor Xiaoyi often said, “Xufang, you are the prophetic child born of scientific progress in the field of genetic research.”This was because her eyesight and hearing abilities exceeded that of normal humans twenty one-fold. She could run, jump and push thirty-three times harder than an average female human. Not only that, her healing and regeneration speed was eighty-four times faster than humanly capable.
People around me always say, “Xufang’s a monster. She’s closer to an amphibian than us humans. She can navigate the water as good as she does on land. With a bite force comparable to a tiger’s and an average body temperature of merely 20 degrees centigrade, how could one call her human? Her pupils would glow red-hot whenever she’s pissed off too.”
Jiang Zhi was the only one who would say, “Ah Fang, it turns out you get drunk from eating eggs. From now on, I’ll keep feeding you eggs okay? Promise me you’ll marry me when you’re drunk alright?”
Who’s this Jiang Zhi you ask?
He’s the sickly but also the most drop-dead gorgeous man in the entire imperial capital. Three steps will make him pant as if he’d just finished a full-marathon and five was enough to make him cough like a chainsmoker.
It is said that one would easily forget the beautiful people of the world upon laying eyes on Jiang Zhi.
Zhou Xufang would always say, “He’s my pretty-boy, Jiang.”
It wasn’t too long after their relationship had started that Zhou Xufang would always ask, “How would our children turn out? Will they grow up healthily?”
To which Jiang Zhi would always reply, “It matters little to me how they turn out.”
“Will I lay eggs when the time comes?” After all, she had the characteristics of a fish, with the ability to breathe underwater. However, like a monkey, she could also jump ten meters high. Either way, it’s not particularly outlandish to expect her to lay eggs as far as children are concerned.
Jiang Zhi patiently assured her, “As long as it’s co-produced by me, Jiang Zhi, even if it’s an egg, it will be the most precious egg in the world. Ah Fang, birth my child without worry. I will make a nest out of gold with a lining made of silk to cradle our child. Come, let’s make it the happiest, the most prosperous egg to have come into existence.”

What a weird description

Okay…. This is weird…

I Shocked The Nation After Divorce

Reborn As The Big Shot’s Sweetheart