Apocalypse: Living with a Cute Baby 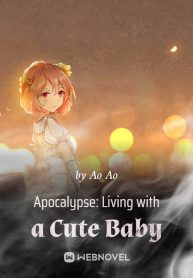 “An accident. She’s pregnant. How unlucky. She got pregnant in one shot!

What was even more unfortunate was that the end of the world had arrived, and the entire world was plunged into a terrifying crisis. How could his mother and little packrat survive?

In the post-apocalyptic era where resources were scarce, she had everything she wanted in her space.

She brought her baby and lived a leisurely and rich life in the post-apocalyptic era.

Right, she had to find the baby’s father. She couldn’t possibly let the baby be born without a father, right?

Thus, she brought her child onto the road to find her father.

She thought that her baby’s father would have a miserable life in the post-apocalyptic era.

However, what she did not expect was that her child’s father was actually a hidden big shot. Not only was he doing better than her, but he had also established a new human settlement and became a king-like existence.

“”From now on, you two will be under my protection,”” the man said as he hugged her domineeringly.

“”Well, from the looks of it, she doesn’t have to worry about the good stuff in her space being stolen anymore.”””

Don’t make this a trial… I’ll kill you author if you do that!

its good but so frustrating the female lead.

This work has a very simple plot. There’s not a lot of twists and turns. There were some characters mentioned in the early chapters that were not given resolution. So it would leave you with a feeling of dissatisfaction. The ending, too, was hurried. It was left for the readers to supplement the ending.

Reading how the FL and ML behaves could really be aggravating. Both of them are simple to the point of being idiots.

Grammatical errors are present but not a lot and are the typical ones found in any translations.

Overall, this is fairly an okay book to read if there’s nothing better. So read at your own risk.

Everything was rushed and no explanation was given about how quickly they seemed to form bases and have all kinds of things prepared (especially for that one villain guy with the C name); no time line was really given for most of the novel. The leads are frustrating and so simple that some would find them stupid. As someone commented before, read at your own risk.

That man who made her pregnant in 1 SHOT! Damn Rep+ XD

My Ex-Husband Is My Neighbor

My Househusband Is The Nation’s Favourite Husband