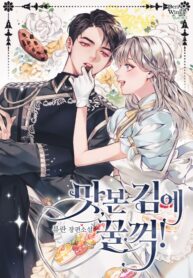 “Are you eating in this situation?”

“Of course! If you die after eating, you can have a peaceful death without any regrets. Would you like one?”

Luana, an abandoned princess had reincarnated into a novel. It’s a story where she was doomed to die.

She simply wanted to eat what she wanted. But she was mistaken for a witch because of a cheese jerky!

Legion, the commander of the kingdom’s occupation army, had lost his sense of taste. But he tasted heaven with a jerky of Luana.

So he dragged her to the empire to dispel the curse that has been passed down from generation to generation.

“Prepare the same thing for dinner.”

She was happy to be able to cook and eat delicious food to her heart’s content, but…….

Now she wants to fatten Legion.

If he would eat all three meals a day and make sure to also have dessert, he will gain weight on that body……!

The Duke’s Villainous Daughter is Depressed